Lighthouse Lore in the Lowcountry

Interest in the Hilton Head Rear-Range Lighthouse has peaked since its renovation in May. Overlooking the Arthur Hills Golf Course in the Leamington community of Palmetto Dunes Oceanfront Resort, the lighthouse is featured on the National Register of Historic Places and part of the Inventory of Historic Light Stations. One of only a handful of surviving lighthouses in South Carolina, the Hilton Head Rear-Range Lighthouse is the island’s only historic lighthouse. Since its recent renovation, the lighthouse has garnered local, regional, national and industry-wide media coverage. 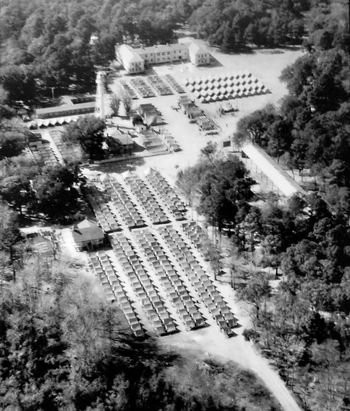 The lighthouse, which originally included a wooden exterior, was deactivated in 1932. During World War II, however, the structure served as an important lookout tower for enemy ships and anchored Camp McDougal, a network of U.S. Marine temporary barracks and ammunition sheds. Gun emplacements and searchlights were established on the nearby beach. Marines were taught to use naval guns, called “Big Betsy,” as well as .30 and .50 caliber machine guns, and practiced firing these weapons into the Atlantic.

This Halloween weekend might be the perfect time to visit the Hilton Head Rear-Range Lighthouse, as a number of interesting ghost stories and legends surround the historic structure.

In 1898, a major hurricane lashed the South Carolina coast. Determined to keep the light burning, lighthouse keeper Adam Fripp died of a heart attack during the storm. At Fripp’s urging, his 21-year-old daughter, Caroline, kept the navigational light burning. But she passed away a few weeks later from exhaustion and the loss of her father, inspiring haunted sightings of a female ghost in a long blue dress on dark, rainy nights. Learn more about this ghost story here.